Rather than try to tackle complex national and international issues and institutions that affect the entire U.S. , we concentrate on place based trends and academic research that more directly reflect our everyday experiences in our own neighborhoods, workplaces, and other closer connections. We seek to grapple with ideas that stem from and have immediate implications for our personal ties and intellectual enjoyment. We deal with those grassroots issues not to influence public policy or resolve differences but to gain an understanding of the way of the world-- in order to sort out the chaos and thereby increase our pleasure.


We start from the premise that changing the body politic at the state and national level is becoming increasingly difficult for citizens of the 21st century in the way that the power structure was able to do at the start of the 20th century, when American Progressivism was imbued with a strong reformist optimism.  “I propose that we lead” declared Edward Adams in the paper delivered at the organizational dinner of the Commonwealth Club of California in 1907. That determination has long since been replaced by anger or apathy, cynicism or irony. Were it not otherwise, the Commonwealth Club would still be engaged in “public service” i.e. attempting through their long standing “Study Sections” to help shape California laws and regulations. Now only specialists attached to policy institutes and politicians’ offices can comprehend such complicated issues, not to mention offsetting the power of money.


We therefore put aside debates over broad public policy matters such as “the media”, health care, diplomacy, climate change, and immigration policies that require a level of expertise that defeats all but the most determined policy wonk.  Or they happen in our everyday interactions but devolve into heated rants.

That said, however, certain patterns of actions associated with racial, gender, and employment relations, for instance, have various impacts affecting human activity around the world including strong influence over our own daily lives. These human tendencies, we believe, can best be examined as they are manifested in particular contexts which we call CulturePlaces.

By culture we mean the normative order, grounded and manifested in specific places, explained by the behavioral sciences, and illuminated and animated by the arts and humanities, which allows us to comprehend ourselves, others, and the world around us, and through which we make sense of our experience.  We probe what has been called the Human Condition with an emphasis on societal trends and artistic expressions that we experience in our own lives and provide texture and insight leading to pleasure. In short, culture is shared meaning.

For places of culture to be more than divertissements, they must be pertinent to the formation of our values and bonds of friendship, what has come to be referred to among academics as adding to our “social capital”. Social capital is the aggregate of the actual or potential resources which are linked to a durable network of relationships of mutual acquaintance and recognition – or in other words, to involvement in a close knit group.

One of the most prominent figures in this field, Harvard professor Robert Putnam, has described social capital as: “…features of social life – networks, norms, and trust – that enable participants ... to pursue shared objectives…" Having fewer social relationships to lean on will have implications for boomers’ quality of life. As Putnam notes, “[s]ocial isolation is widely recognized as a strong predictor of morbidity and mortality, especially among the elderly.” That said, however, we also accept that perspectives will vary. We expect and encourage differing opinions.  But there is a commonality of rules of engagement--ways of behaving in our exchanges.

Insights into CulturePlaces provide significance and purpose which contributes to our happiness.   Observations that we accumulate not through “knowing more and more about less and less,” as scholars do, but just by living a cosmopolitan life in the Bay Area. These intellectual perambulations equip us to form opinions that deserve to be explored by others who share an interest in the deeper significance of events and related information.

We emphasize dialogue among participants of our salon not passively watching lectures or panel exchanges. As the great polymath Sir David McKay wrote in his book on sustainable energy Without Hot Air,  "Convictions are stronger if they are self generated, rather than taught"

Rafting the Cultural Currents of the New Millennium 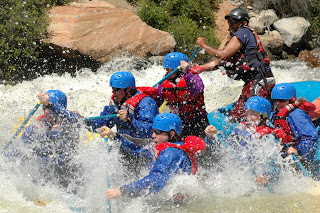 "To enter the current of this poem is to hurtle downstream through history on a flood of eloquent and passionate language that is in turn philosophic, satiric, tender, angry, ironic, sensuous, and, above all, elegiac.”
-Helen Vendler on “A Treatise on Poetry” by Czeslaw Milosz 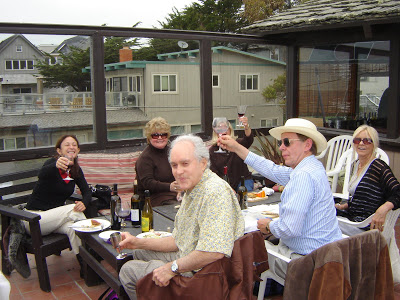 A pop-up Epicurus Café at the Bach Dancing and Dynamite Society, Half Moon Bay


“Our culture evolves around acquisition of material goods, and that turns out to be a pretty dissatisfying pursuit. It is very important for people to have meaning and purpose in their lives and connection to other humans.”
-Dr Dan Shapiro who defeated cancer and counsels other patients, in conversation with Jane Brody, New York Times

Clearly, one’s genes as well as class, gender, age, race, sexual orientation and the numerous other distinctions that seem so wrapped up in our identity these days, lead to our personal points of view. The CulturePlaces Salon provides more opportunities to compare these views on the ramifications of the changing social landscape constrained or enhanced by our biological influences. (Nurture/nature)

We have found that understanding the implications of our experiences emerge best through discourse, not absorbing more information. All that is required is a curious and probing mind and the capacity for dialogue (attributes that are too often missing in conversations around the water cooler or at the dinner table). And while we may wrestle with weighty matters that can ignite strong emotions, we want to be able to treat them playfully and with a disinterested passion for clarity that avoids partisanship, ad hominem arguments, grandstanding, or ax grinding.  Such a mental exercise results in pleasure and reduces the pain of confusion and discord that too many conversations can devolve into. 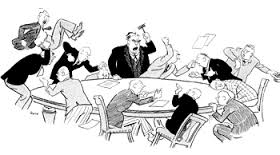 This conversational skill is not easily acquired. CulturePlaces Salonistas have demonstrated that they have the wherewithal to participate in our round tables


For a few of our discussion programs, we invite someone, often an advocate or practitioner involved in some aspect of an issue, to join us as a resource person. This individual doesn't give a presentation, like a TED Talk, looking down on the audience as the "sage on the stage", but instead offers some preliminary remarks to launch our exploration and then serves as a kind of “river guide” to keep the discussion on course.

In most other get-togethers we utilize an author's talk, movie, play, article, podcast or video found on the Internet to spark our discussions. TED itself has finally launched TEDxSalons which allow attendees to discuss a TEDxTalk face to face, though most TEDx sites treat TEDxSalons as briefer versions of TEDx gatherings. The administrator may send out a list of some timely articles or upcoming third party activities, like a talk at the Commonwealth Club, as a potential springboard to provide focus, which are then voted on via the Internet. Alternatively, we may select a topic at our meetup. 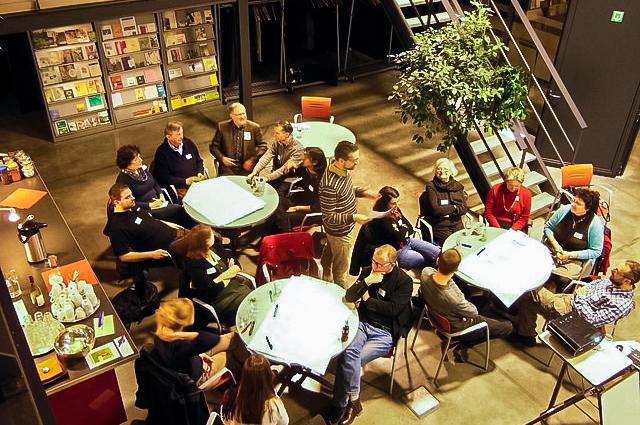 The Threat and Promise of Diversity

Diversity has become the holy grail of our times. but we consider that diverse groups can either add to or reduce the enjoyment of our get-togethers. Clearly political differences, thanks to our President, have grown more acrimonious making good conversation ever more elusive.

It is a truism that people prefer to be with others like themselves.  With the exception of fraternal and religious organizations, both membership in affinity groups and trust have declined, coinciding with increases in immigration and the rise of ethnic, racial, and gender distinctions. This decline in group memberships is mostly explained by one variable: greater heterogeneity. In place of traditional organizations, more and more people have constructed silos of ideological homogeneity which have become echo chambers.

For example, the area around Minneapolis and St. Paul – the area of highest social capital in the USA – was populated with Scandinavians. Something has persisted over more than five generations, and separated by thousands of miles and different political structures, to explain why both the residents of Minnesota and the Scandinavian nations today remain so connected and trusting. This continuity is recently threatened by the immigration of Somalis into the Minneapolis region.

There is considerable evidence that social and ethnic heterogeneity is associated with lower levels of social capital, not only between groups but within them. Data suggest that this may be one of the most powerful explanations of local and regional variations in social capital.

This finding is difficult to interpret. After all, the bridging among groups that eventually reduces long-term conflict cannot easily occur if we lack empathy. What really needs to be established is what factors facilitate the growth of social capital in contexts where the starting point is characterized by strong ethnic and social fissures but which hold out the possibility of an enriched community.  In other words, how do we go beyond the alienation that led to "Trumpism". 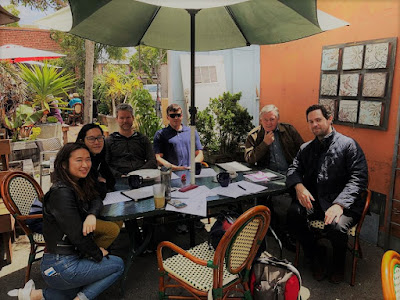 One of our goals is to encourage more participation of those who may have stayed at the fringes but possess the educated qualities that would enhance our dialogues. We want to invite them to our intellectual potlucks where all participants can bring their own unique ideas and questions to the table.

Popular posts from this blog


Over a century ago, Sir Francis Galton initiated research into individual and race differences in intelligence and temperament. He was the first to propose the study of human twins and of selective breeding in animals to disentangle the effects of heredity and environment. And it was Galton—who spent several years exploring in what is now Namibia as a young man—who first contrasted the talkative impulsivity of Africans with the taciturn reserve of American Indians, and the placidity of the Chinese.

Galton further noted that these temperament differences persisted irrespective of climate (from the frozen north through the torrid equator), and religion, language, or political system (whether self-ruled or governed by the Spanish, Portuguese, English or French).

Regression toward the mean and IQ

A reader sends Steve an Excel file for calculating expected IQs of children based on their parents' IQs.